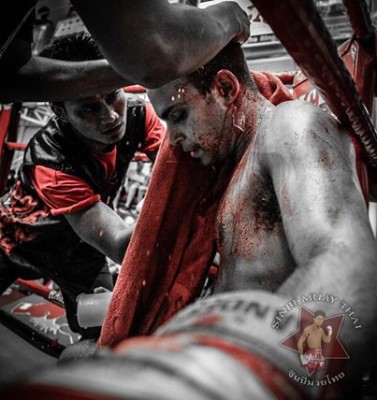 Fighting. You can’t just want it.

Let me preface this article by saying that no matter what hoops you have to jump through to become a fighter, they become a part of the process. If you are someone who already has a passion and love for training and combat sports, this is just information for you to absorb in preparation for competition.

The intent of this piece is to bring awareness to the things you don’t automatically think of when it comes to fighting. Extra head space that is taken up by paper work, medicals, and other time consuming responsibilities. Although the points highlighted below may sound like a pain in the ass, note that nothing worth having ever comes quickly.

No matter what your profession or hobby is, counting the days and obstacles you have to overcome is a much too common mistake. To become a doctor you must complete 8 to 12 years of schooling; think about that commitment. The number shouldn’t cause fear or disappointment if your passion for success is real.

“Everything worth having in life takes hard work, perseverance, and time.”

With that said, enjoy the journey day by day, smile with every achievement and laugh through every obstacle. I hope that these five points will help you to get better prepared, so that your focus lies in your training and the fight itself.

It’s a simple equation of doing things others are not willing to do, sacrificing time and resources others are desperately hanging onto for a false sense of safety and security.

If you were to make everyone happy at all times based on their views and opinions, you would lose yourself. And when that occurs, you lose those around you as a result as well. What we do for ourselves reflects outwards upon those around us. This journey has inspired me, which inspires those around me. The opposite is true. Being limited by others often causes resentment, it causes internal frustration, and it affects those around us in a negative way.

Do it for yourself, and ultimately for others.

My conclusion under this heading is that once you do everything you can to become the best version of yourself, the right people will hop on that train with you and support you, the bottom-feeders will just grab at your ankles and make comments like:

“This doesn’t pay your bills, why are you doing it?”

Although it covers rent, training, and a fulfilled life for me, it’s a question that does not yield nor require an answer. The picture of you getting your hand raised is well worth a thousand and a half words, that gold around your sexy waist is worth more than their safety net fund, and the feeling of completion, of achievement, of glory, and of doing something without a blueprint becomes satisfactory enough to speak for itself.

The Paperwork and Physicals

In my opinion the biggest nightmare a fighter must go through. You have trained for this single fight. Busting ass in the gym, day in and day out. You ate like a lean animal and not like the usual fat ass that us fighters tend to be. You even got the match up! After all of the training costs, you are now expected to pay out of pocket to get medical work done. The case varies state to state and even promotion to promotion.

Despite the hassle, these regulations are in place to keep fighters safe and to ensure longevity in the sport. In a sport where 6 of the 8 weapons serve as blades, cuts are likely to happen.

Make sure to check with both the promoter and the sanctioning body on what is needed, and if all/any of the medicals will be covered. Fight to get it covered, if you don’t ask for it, the chance is that it won’t be.

As an American fighter, the two states I am familiar with are New York and New Jersey, the notes below can be used as a basis to follow as other countries and states follow similar requirements (None of which are needed in Thailand):

New York – Physical is needed to fight, no matter what level you are competing at. Blood work for Hep B, Hep C, and HIV is needed for all fighters competing without gear and elbows within 180 days of the event, whether it is an amateur or professional bout. This is specific to the WKA sanctioning body, I believe the USMTA let’s you fight without any need for physicals if you wear gear.

New Jersey – NJSACB is considered to be one of the most strict, but most effective commissions in the US. NJSACB requires all amateur fighters to have a physical and blood work done for Hep B, Hep C, and HIV, all of which have to be negative within 180 days of the event. Females must obtain a pelvic exam and pregnancy test from an OBGYN. “A” class fighters, fighting with no gear or with elbows must obtain a dilated eye exam, CAT scan, and EKG in addition to the exams listed above.

To some, this might be the worst part of preparing for a fight, sometimes even an excuse not to fight.

With 24 hour weigh ins, just about everyone cuts weight to fight, anywhere from 5 lbs to 20 lbs within 24 hours. To make the weight cutting process bearable, I suggest to hold yourself accountable and lose as much weight as possible prior to the 24 hour period. That way you dehydrate yourself as little as possible to maximize your performance the next day. I care for your longevity, so do yourself a favor and do it in the safest way possible.

You and I are athletes, if we label ourselves as such, we must follow certain principals that identify with that title. We must train and eat like our lives depend on it, because in combat sports, it’s a literal statement.

There is an overabundance of people who “just want to fight”. Commonly those who will post about it all over Facebook, identifying as a fighter, creating an image of this identity to those around them, and one week out. . . drop out of the fight with a bullshit excuse.

Now, this is not to say that there are no serious reasons why a fight gets canceled. With much of our training regimen, fighters have a probability of suffering injury during camp, a
concussion which should never be taken lightly, and of course a positive test when it comes to blood work or a pregnancy test is also something that you would like to dodge before fight night. (yikes)

I wish I can tell you that it gets easier, the more you fight and the more reality this sport beats into you, the harder it gets. Once you reach a certain level, things don’t come as quickly, it all becomes fine tuning and tweaking the most intricate of details in an effort to make the next adaptation as a fighter.

If you have stuck to it long enough to get to a high level, you notice that everyone has the same set of skills, that all athletic and technically sound.

So what makes one fighter better than another at this point?

Most often, it comes down to time. Time has a way of sorting out the people who want it and those who don’t. There have been at least a dozen times where I could have stopped, all with rational reason. The same reasons that made others quit before they even got started. When they quit, however, that’s when the warm up session begun.

It all comes down to mental toughness and how bad you really want it. Don’t worry. Even if you feel like you don’t have what it takes, it is not until you are in that fight or flight moment, where you break out of your shell. Where you learn what is sitting inside of you. Toughness can be learned, it can be forged.

Losers Quit When They Fail
Winners Fail Until They Succeed

Mine was beaten out of me in a garage, from my first day of training. Every. Single. Day. Until I competed.

Let’s come back full circle to the quote that begin this piece:
“Enjoy the journey day by day, smile with every achievement and laugh through every obstacle”

Top 3 Kicking Drills for Power and Conditioning by Ognjen Topic