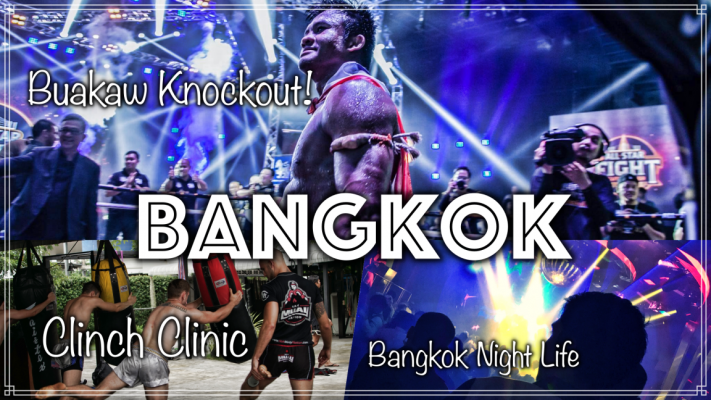 The first full week in Bangkok did not disappoint. Within a days time, I got off of the bus to haggle with the taxis before ultimately grabbing an Uber to the gym. On arrival, going straight into training with the Nak Muay Nation team at Khongsittha Muay Thai, which was followed by quite possibly the most stacked card we have all bore witness to – the Buakaw headlined “All Star” show.

The show concluded with a sleepless night. . . followed by more training. You know, the modeling behavior behind the Limitless Life.

Buakaw headlined the show; but any fight on the undercard could have headlined an event of its own. Names like Pakorn, Saenchai [in the corner], Asa Ten Pow from the United States, including a number of Banchamek and foreign fighters who have proved themselves on the biggest stages of Muay Thai such as “Thai Fight” graced the stage before the main event took place. From the gold-trim, black & white attires, to the production, entrance trailers, and handsome ring announcer [Matthew Deane], it was a show that we all felt blessed to sit ringside for.

Needless to say, the knockout by Buakaw rose the entire crowd to their feet. The excitement carried over as we visited a number of the downtown Bangkok night life locations to celebrate the win and life’s pleasures. The work never stopped, we just sacrificed a few hours of sleep to get to work; within the first week I taught two separate clinch clinics at Khongsittha in Bangkok after surveying each foreign member of the team.

Practically every foreign fighter clinched; anywhere from once a week to. . . basically never. . . before coming to Thailand. The grinding sessions of clinch in Thailand undoubtedly improve your skill level, but these seminar-like sessions were implemented as a crash course to build from during the hours in the ring to come.

Let me finish this up so you can get to the video to witness some of the beautiful Limitless Project footage, the vision for these video logs, and what is to come next.

Seeing the world is something that many say they “wish” they had done.
Something they wish they could do.

Throughout this journey I have met those who quit their jobs. . .

Who made the decision to travel after obtaining Master Degrees in prestigious schools. . .

To leave everything that would ultimately amount to nothing. . .
to pursue passion and fulfillment. . .

Those who left relationships lasting all the way from a few months to 12 years. . .

Those who sold their house. . .