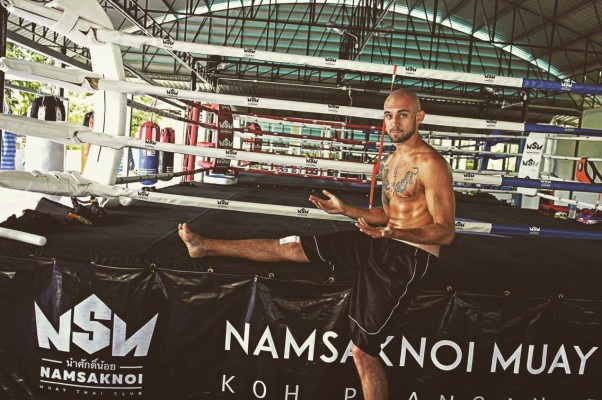 Just as I thought I was invincible. . .  The Thai clinic experience.

The world seems to humble you the moment you make a dramatic statement. Just last week, I was listening to my friend talk about her experience with infections since arriving in Thailand. I gloated in response, talking about never suffering from an infection during my entire fight career. Including all three of my trips to Thailand.

Over six years of a close to full-time job, all spent on dirty mats, sharing mouth guards, and other things that I won’t share with you guys. Today was the day it caught up to me.

I sprung up in pain from my bed in the middle of the night. All I can describe the feeling as is an army of little fire ants crawling inside of my knee. Side to side. . . a swishing. . . stinging and burning sensation.

How did I deal with it? I blindly got up from my bunk bed, made my way to the bathroom within the gym, and went back to bed.

“I’ll deal with it in the morning.”

The sensation became like a procrastinator’s snooze alarm, waking me up and thinking “what year is it.. and why is my knee on fire?” until I finally got up to. . . well, train of course. I trained for 8 rounds between Kru Namsaknoi and the Yokkao bag working on my boxing, but as you may know, proper boxing has very little to do with upper body movement.

The more that I sat onto my punches the more pissed off my knee became. Namsaknoi is a master at reading the body. Without asking any questions he told me that he thinks I have done enough this morning. I finished the training session with a bit of stretching and kettle bell work for the core.

The humid, hot conditions in combination with the amount of sugar contained in most of the Thai cuisine, creates a breeding ground for bacteria; something us farang are not easily adapted to. Most of my cuts and scrapes take at least double the time to heal as they would back home. As minuscule as they seem, if not constantly treated, they easily begin to fester.

Arriving at the Clinic

After lunch, Namsaknoi took me to a government owned clinic in town. I could have troubleshooted my way there, but instead he insisted to help me with the process; it was a sign that he truly cares about those within his camp.

Thai clinics and hospitals owned by the government could be a hit or miss, but this one (located in the center of Thong Sala, Koh Phangan) was very clean. It felt like I was in a privately owned establishment. Being from the United States I tend to be nervous about the price of medical care, but as you will find out, the process was as smooth as silk and as cheap as a latte.

After one or two short questions the physician got straight to work. He pulled out a needle to pierce through the skin, followed by using a razor to slice a larger opening beneath my knee cap. The incision was rather pain-free. It was the displacement of the fluid within my knee that caused me to weirdly laugh and smile in agony.

After squeezing out a minimal amount of water and puss, he concluded that it is better to go with an antibiotic treatment as the infection already set in. Dicloxacillin x4 per day, for the next five days. In addition to this, he said to use these days away from training. Namsaknoi and I agreed to revisit that statement in two days.

After throwing in some pain medication the total for the medication, treatment, and bandaging came to a whooping 150 Thai Baht, equalling to less than 5$. I was not able to sufficiently communicate the cause or actual condition with the physician due to the language barrier, but through past experience, I can point to bursitis as the issue.

My elbow suffered from this in the past after being slammed on hard matting. It seems to be more of an issue when training and living in hot, humid conditions as it quickly dissipated on my trip back home in the past. In this situation the knee became more of a problem as it’s irritated throughout the day; used when walking, riding the bike, and during other everyday activities.

The bursae of the knee and elbow are the fluid sacs and synovial pockets that surround and sometimes communicate with the joint cavity, when acute injury happens, they swell and fill with liquid and puss.

Sometimes the limitless mindset gets us to think we are invincible, although it’s a positive way to live, I know these things happen, I just feel grateful for the smooth process and immunity thus far.

When in Thailand, make sure to take take care of your wounds in their initial stage. What may seem like a scratch, or in my case, minimal fluid build up in the knee, may fester into something that keeps you out of training. A couple of days is no issue, especially as I am in Thailand for an indefinite amount of time,

but if you are heading for a limited stay, it may set you back from the goals you had planned.

On arrival, grab a few sterile swabs, rubbing alcohol, antibiotic ointment such as Bactex (80 Baht – 2.50 USD), and cleanse any susceptible areas after your post-training shower.

P.S. There was a chain of events that led to this instance. Impact from a minimal of 500 knees per session x2 per day added up to initiate the inflammation process, running before each session in addition to the actual training session continued the irritation. Coupled with the wet and humid conditions spoken of before, it was something bound to happen, however, we are in this for the long run. A few days from now things will be back to normal, it all happened as part of the process, we move forward and nurse it as we sharpen our other weapons.

6 Things You NEED To Know About Being A Female Fighter