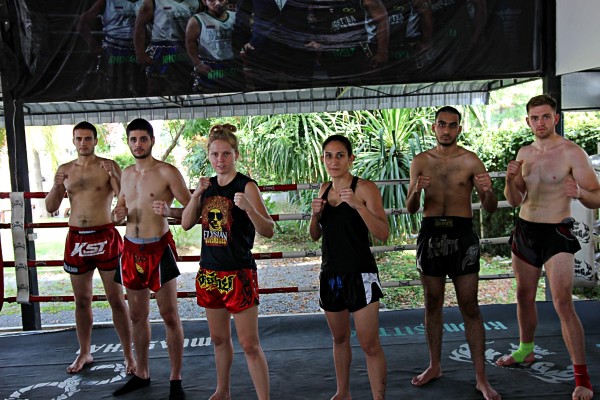 The First Week of Camp in Thailand.

It is the beginning of a process like no other. Adjusting to a climate that makes your toes curl. . .

. . . but the cramping kind that begs for electrolytes.

The first week is like being the new kid at school. You have to figure out the gym’s culture, how the fighters and student interact with one another. . . how the coaches work with the students and what their expectations and gym norms are.

The differences in this particular Thai gym were apparent from the moment I stepped out of my hotel room, the morning after my arrival. I noticed a number of fighters and students who were doing a series of sprints and agility cone drills in an alleyway outside of the gym – although it is becoming more common, it is something outside the norm to see here in Thailand.

A tour of the gym and facilities:

Everyone was a part of the Nak Muay Nation Fight Team comprised of fighters from all over the world who arrived at Khongsittha Muay Thai in Bangkok, Thailand. Some fighters and students were already here training throughout July with WBC Champion Brett Hlavacek.

The August portion of the camp was organized by Sean Fagan and is being hosted by me – Paul Banasiak of Muay Thai Athlete.

Building a strong team takes communication and trust. With this in mind, the orientation comprised of each member introducing themselves and telling their story, each one unique – from quitting their jobs to pursue a dream, to cutting away distractions in an effort to improve their mind and body.

Many come to Thailand for opportunity, to learn and to fight. It always amazed me to see fighters from Nation’s who are thriving in comparison to Thailand, coming to “find more opportunity”. Female fighters who have a hard time finding any opportunity to fight, fighters who may have a gym that is incomplete (i.e. lacking in clinch), or simply because the energy and dedication of those around them doesn’t match their own.

The dedicated few who joined the Nak Muay Nation team are as follows:

After the orientation, the team went over specific goals that they wish to achieve during their time here. These goals are made possible with the training at Khongsittha being systemic, even for Western standards.

No day is alike as the intensity and duration of each training session is taken into account. So what are the basics of the program? Keeping recovery, learning, technique, and intensity in mind.

This may sound rather standard, but as we progress so does the training. The run on the following day is a 10K. This means getting up at 6:00 AM to get going for 6:30 AM. It also means that the intensity of the training will be rather moderate or light. By the end of the week we move into sprint and agility work.

To keep it short and simple, the program covers all bases, varying intensity and duration of training and runs. Flipping between sparring and clinch days, live work and technique drills, techniques taught seminar-style inside and outside of class, and even strength and conditioning sessions taught by highly accredited trainers. Oh, and in an addition to this, ice baths are included:

Week One in Summary

The dedicated few. I said this earlier in the article and it is no cliche.   I have seen and coached my share of fighters. Those who look amazing online as their main focus, but that’s as far as it goes, those who bullshit their way through training, those who need an extra push, those who make excuses and those who really have it.

This team of individuals sets a new standard. Although some have less experience than others and may only have a handful of fights, they have the dedication missing in most of who pursue this endeavor. I may hear from one member to another about an injury or sickness another fighter has, but I see him or her in the gym the very next morning. . . showing no signs of slowing down. . . no signs of weakness.

These fighters are being told to take the session off, to relax. This is a rare event as you are expected to be there for each and every session. The team has been holding each other accountable and keeping the intensity high. No one wants to give up on their team mate.

Kate Sholy finished the July camp with a big bang winning her bout at the Women’s World Muay Thai Championship III at the Siam Center in Bangkok. Taking her opponents will with a teep to the face:

Coming up we have official match ups for Robert Kuzma and Kathleen who is fighting on the Queen’s Birthday. They have been working fight tactics in addition to their 5-6 hours of training each day, drilling clinch technique to make up for lost time back at home.

Follow their journey on the Nak Muay Nation Training Camp Page or on Muay Thai Athlete’s Facebook page as they prepare for their first bouts in Thailand.

Check in next week or sign up for the E-Mail Newsletter to stay in touch and be the first to receive new content!