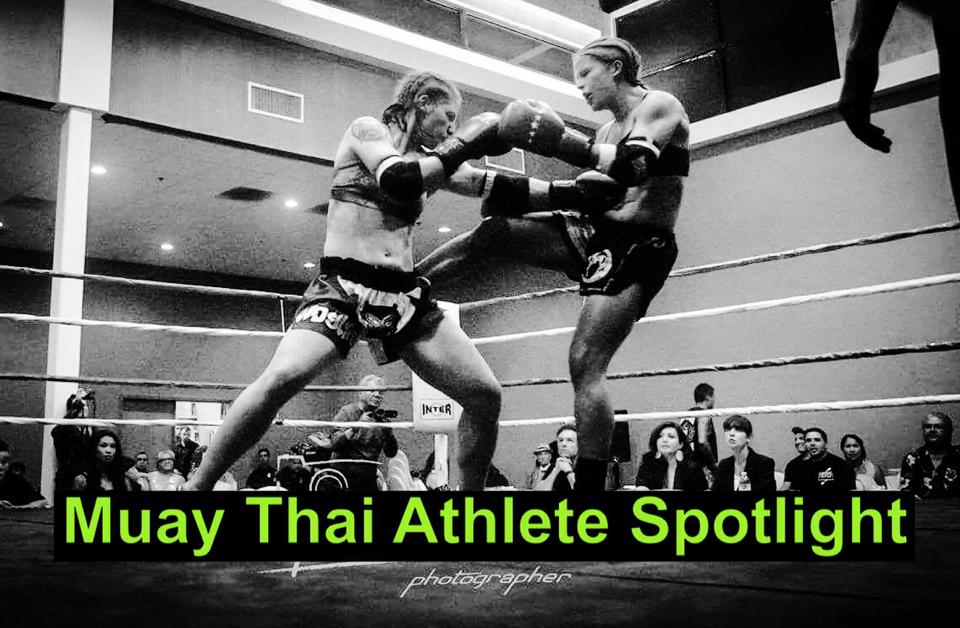 In an effort to help the sport grow we will be featuring outstanding fighters and personalities in the world of Muay Thai. We are all fighting for something, each with our own story, from the 40 year old trying to beat depression, to the young professional athlete attempting to live out a dream. Here is your opportunity to let it be known.

Quoted as the future world champ by her coach, (5-0) Alyshia Madison was born on March 10, 1989 in a military base hospital located in Okinawa, Japan. Coming from a military family has proven to give her the toughness, athleticism, and grit to become the person she is today (Brother Zach – Air Force, Brother Huntere – Navy, Father – Military Contractor). A combination of a soccer athlete, active member of the Navy, student, and Muay Thai champion.

Alyshia started her Muay Thai journey only two years ago in 2013, but has had a lifetime of kicking practice. This is just a small list of her achievements in the soccer world:

We love hearing stories about people defining all odds. Alyshia was able to graduate college with a B.S. in Exercise Science, minor in
nutrition, play college soccer, aid in the strength and conditioning room with a variety of athletes in different sports, become a Muay Thai champion with a 5-0 record and still have her eyes set on a Master’s degree while stationed on the USS San Diego. What’s stopping you from showing up to training during the week!?

1. How long have you been training Muay Thai (fight experience included if applies), and how did you get started?

a. I started my Muay Thai experience back in March 2013. I started off with the classes and after a few weeks asked for some one on one training, which is how I met Coach Steve and started working with him. Shortly after he had me start sparing and training everyday in order to start fighting.

I had my first fight in November 2013 and loved it. I had four more fights after the first and my last fight was June 2014 right before I left for a 7 month deployment for the navy, where I was able to fight and win a title belt in the Battle of Champions that I  still hold, as well as a record of 5-0.

I actually got into fighting from one of my RDC’s from bootcamp. He kept mentioning the all Navy Boxing team saying they don’t have any other martial arts besides Jui Jitsu yet, or telling me to try a gym out, telling me I would like it and be good at it. At first I wasn’t interested in fighting, only soccer, but after a while I changed my mind and looked for a gym as soon as I got to San Diego.

2. What forms of cross-training do you use to help your athleticism and conditioning in Muay Thai?

a. I run at least 3 miles every day by getting up at 0330 every morning before I go to work. I leave work every day to go train at my coach’s house around lunch time pulling out the agility ladder and hurdles, using the battle ropes, different variations of sprints using kettle bells with some, bag work and pad work. Some days it’s more of a strength day lifting light or using TRX or resistance bands. I’m also at the gym every day in every one of Coach Steve’s classes working and helping him out and then sparring at the end of the day.

3. What is your motivation to keep pushing, to train when you don’t want to? How do you stay consistent?

a. What keeps me going and to stay motivated is the support I have. Once my family saw how much I enjoy fighting and understood I wasn’t going to be giving this up they started taking a real interest always asking how trainings going, trying to come to my fights all the way from Florida, and just trying to learn the sport. Just knowing they are there no matter what helps me stay motivated.

I also have great support from my command on the USS San Diego LPD22. They are always asking me about training and my fights, wanting to come to my fights, making sure I’m doing alright during weight cuts, and always working with my schedule for training and fights. Without their support I wouldn’t be able to train all the time like I do.

My coach, Steven is who really keeps me motivated. He’s around me all the time, so he knows how to read me and knows when I’m struggling. We’ve been training together since day one, so he knows how to keep me motivated. He has never asked me to do anything he hasn’t been through or isn’t willing to do and he’s always right there next to me doing the workout with me or pushing me to do better, and without his support and believing in me I wouldn’t be where I am now. I also use those that have laughed at me, made fun of me training, or are hoping I fail in this sport as my motivation.

4. What do you believe will help Muay Thai grow? What are you doing to help that happen?

a. I believe Muay Thai needs more publicity like Boxing and MMA get. Not enough people know about Muay Thai. At work I’m constantly explaining to people what Muay Thai is. The only people who really seem to know about Muay Thai are those who have really been to a fight gym or have a friend that does Muay Thai. I feel that if there were more Muay Thai fights televised on ESPN or just given a broader commercial base on more channels more people who are into watching fights would turn to watch Muay Thai.

5. A fun fact about yourself that doesn’t have to do with Muay Thai or combat sports.

6. If there was a piece of advice you can give to the fans, supporters, and practitioners of Muay Thai that could help inspire them or aid in the growth of the sport, what would it be?

a. Look after your fighters, let them grow and learn. Challenge them but don’t serve them up to someone they aren’t ready; it can break a fighters motivation to fight, especially when they’re first starting out. Believe in a fighter when they are first starting out instead of laughing at them. We’ve all been there starting out and one day that fighter could surprise everyone once they get a skill set. Get to know the fighters, learn what motivates them to fight to help improve them, because not every fighter is the same and can learn the same way

Paul Banasiak is a Muay Thai fighter/addict,
4x champion, trainer, and fitness professional. After leaving medical school without looking back, he decided to fully follow his passion of helping others become the best version of themselves, creating MuayThaiAthlete.com. A website for those who are already passionate individuals who want to take their life&training to the next level.

How Poker Can Help With Your Muay Thai Journey

The Exorcism of Excuse and Regret – World Travel

Supplements [Safe] for Combat Sports and the Muay Thai Athlete