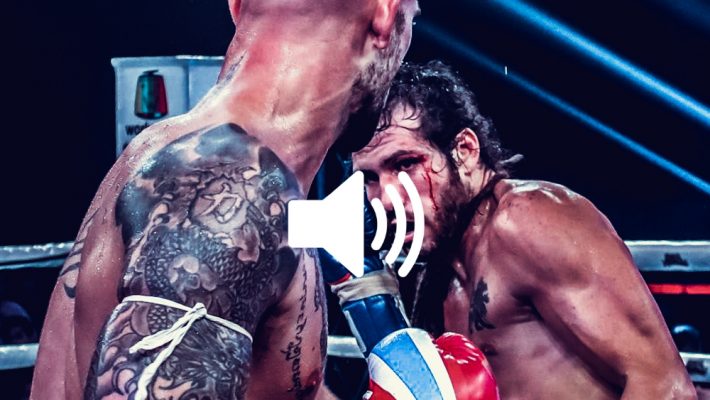 The Sound of a Facial Fracture in a Muay Thai Fight

I realize that many of you are simply here to hear the sound of a number of bones in my face breaking, so I’ll let you have a crack at the clip right away – pun intended. Five seconds before the fight ending bell of my professional debut, you will hear a click as the Peruvian Champion bounces off of the ropes and the top of his head drives into my nose & orbital as I overextend:

It has taken two years before making the decision to get facial reconstruction despite the strong recommendations I received.

. . . this bout was my professional debut in Bangkok. Buakaw’s Super Muay Thai was a revered promotion at the time, a show that many foreign fighters honored themselves to fight on. A small ring within the Workpoint Television studios forced the action and the fighters were stimulated by the promotion heads to fight toe to toe, strongly discouraged from taking a step back.

Matteo (then 37 – 10) was a Sutai Muay Thai Nak Muay, Peru National Champion, IFMA World Representative and is the current IFMA Pan American Champion. My trainers in Bangkok approached me about the fight stating, “maybe. . . no clinching. . . many knockout, have very good knee na.”

I came to Thailand with a focus on becoming one of the most well rounded foreign Nak Muay in my weight class. At the top of the list was building a stronger clinch game, I had to be honest with myself and look at the holes exposed in my game by Gaius Ebratt at Madison Square Garden despite a win that put me at 10-0 in 2015.

I was never used to watching videos of my opponents. I just hoped that they would watch mine and that I would give them a different feel once reality hit them in the ring. The trainers could feel that I was upset at their lack of belief in my clinch game. Their solution? Their solution was to show me videos of his knockouts within the clinch. Although I wouldn’t recommend that as a method in killing the confidence of a fighter, it worked really well for me. I looked up from the video at the head trainer Rong and said, “Kru. . . yes, very good, but not against me.” The trainers smiled and shook their head side to side.

I entered the fight by tapping gloves and adding a stress fracture to my foot on the first kick that he checked. I didn’t want him to see the effect that it had. . . I repeat kicked into the check two following times numbing my facial expression. I then knew I couldn’t continue to force the kicks and had much less spring from the outside, I was forced to enter the clinch and to fight the remainder of the bout there.

It is moments like this that we ourselves perhaps manifest into reality. This highlight features clips from the fight that led to the victory.

After stepping out of the ring and sitting down to take my gloves off. . . a Thai boy ran up with my reaper mask on. I must have dropped it somewhere. I took a photo with him and his friend. When looking into the camera I quickly noticed the asymmetrical shaping of my face. The adrenaline was high, but it quickly came down as my team thought about what to do next.

I asked for my nose to be set back, but no one was confident in committing to do it (that maybe the one set back of fighting away from the supermarket parking lots in Thailand and on a legitimate promotion). I did my best pressing it back as hard as I could, but it was apparent that we had to get it x-rayed at the hospital. To cut the story short and conclude. I had 3 full fractures and a number of hairline cracks, the septum was deviated in two locations almost completely blocking the airflow in my left nostril. My relationships with almost everyone back home quickly dissipated as I opted out of the surgery and failed to return home.

I told myself that I would stay for a minimum of six months; in my head it was the minimum amount of time to change character and patterning within my brain, to adapt to the work rate in Thailand, to take a prior weakness of mine and to make it a strength that no one else possessed. I was asked over and over again when I am coming home, when I am getting the surgery, when am I going to stop doing this to myself, when am I going to stop hurting the people who care about me.

“What would most people do in this situation?”, I asked myself. Once I found the answer to that question, I did the polar opposite.

Then came the night that changed the path of my career and who I would ultimately become as a man. I sat at a dinner table across from the Legend Namsaknoi and told him my story. I told him that I didn’t have the ability to connect with anyone I was surrounded by, that no one could comprehend the wants and needs that I had. . . and that no words could describe what I was aiming to do. That I needed someone who can match what I was feeling. 9 months in Thailand in total passed. Namsaknoi was a militant man, at the time I didn’t know what I was actually wishing for, but that’s a story for another day. . .

Since then, I have adapted to not being able to breathe. For the past two years keeping a bucket in the corner to get rid of the congestion during and in between rounds; the Thai trainers would shift it throughout the sessions to wherever I was. I have plucked every nose hair out, taken over the counter drugs, prescriptions, nasal sprays, oils and Vaselined the inside of my nose before fighting all before thinking that I actually had something needed to be fixed. I was fixed on the opportunities given to me, ones that any smart fighter would take before they are gone.

I could get away with it then, but at this level. . . the warrior shit isn’t cute anymore. Guys are business men, they are intelligent, technical, athletic, studying their opponents and coming into the fight as close to 100% as possible. I am learning the appropriate times to manage that reptilian part of my brain with my intelligence, I now have a redefining opportunity to reset – directly after surgery I am taking my one way ticket back to Thailand.

I am looking forward to writing this new chapter, I hope to see you there at the next Training Camp and I am thankful for the obstacles that have been put forth. . . as I would have no story to tell if it wasn’t for their appearance.

I want to give a special thank you to Sean and Lawrence Kenshin as they were the only people I spoke to during my time disconnected from the rest of the world. They were the ones who I was able to confide in and communicate with before having the opportunity to sit across the table from NSN. I am proud to call them my friends as they are genuine people attempting to influence our community in an honest and  positive way. Some stories go untold, but their impact goes miles further then you directly see through media.