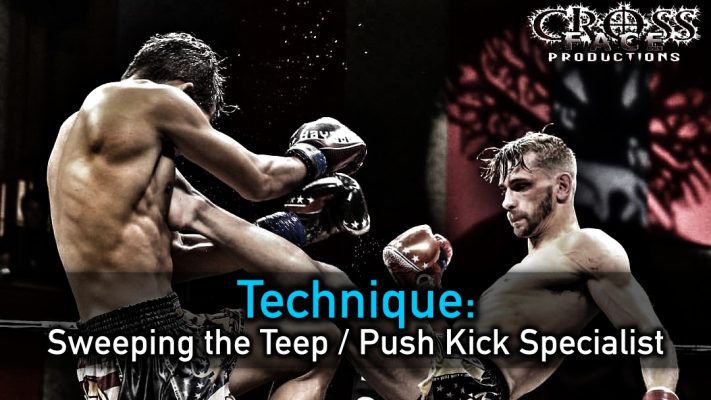 Countering the Teep / Push Kick With a Unique, But Simple Sweep

Ognjen Topic is back with yet another unique sweep. This one is straight forward and effective for both the beginner & the advanced fighter. Being teeped [push kicked] can be frustrating on the other end, to parry at times is not enough.

Using a sweep in response to the teep does not only score and show control within the fight, it also gives our opponent a fair reason to hesitate, with apprehension come holes, with apprehension a weapon [like the teep] becomes dull.

Lets get to drilling ladies and gentleman – this one is taught by the best:

For those who enjoy to teep and often hesitate in response to the catch and counter, here is a tutorial on how to escape the vice grips before the opponent counters us:

Step Two: Pass the Leg Through to avoid a second [counter] teep to defend the oncoming sweep

Step Three: Pull the leg in to the outside of your lead leg, stepping the front foot with the side of your thigh against the back of the opponent’s.

Step Four: Toss the opponent over your thigh, circling the right foot in the direction of the sweep (note position within the video) ending up in a proper squat-like position.

Ognjen Topic is a current IKF World, WBC, WKA National and a former Lion Fight Lightweight World Champion in Muay Thai. He has been training at North Jersey Muay Thai (NJMuayThai.com) since 2005. In 2008, Ognjen began training and fighting out of Eminent Air Gym in Bangkok, Thailand.  Eminent Air is ranked one of the 10 best gyms in the country. Ognjen has divided his time primarily training at NJMT, while spending months each year at Eminent Air. There he is able to gain a competitive advantage, while preparing to compete on large televised promotions such as MAX Muay Thai, Ch. 8 (Highest rated show in Thailand ) he has also fought in Lumpini, Radjadamnern, Aswindam, Jitmuangnon, Theprasit and many more stadiums, including one in China. Back in USA, Ognjen is a full-time instructor who holds class while training for big fights, such as on the Lion Fight show. Aside from fighting, Ognjen is also an award winning graphic designer, some of his work can be see at TopicCreative.com