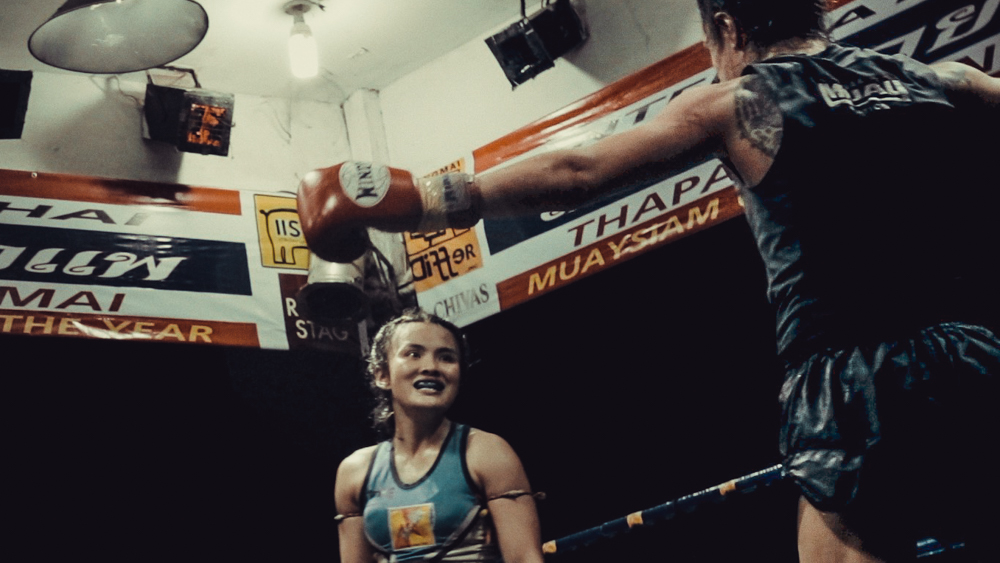 Sylvie is an American born fighter who has willingly chosen to experience a similar life to that of young Thai fighters. What is important to note is that this was a choice of Sylvie’s, a decision with a long standing goal in mind; initially 100 fights in Thailand, then 200, and now 400+ fights, a stadium title, and a spot on the US Olympic team.

This choice may be puzzling to most Thais, as many would trade this lifestyle in for one of comfort if given the alternative option. When you hear the numbers that are difficult to wrap your head around, “he has 200-400 fights”, it is a norm for the Thais. Most often, however, it isn’t their choice to chase this number. Each fight is a paycheck, a paycheck that not only covers their head when it is raining and one puts food in their mouth, but one that the family depends on.

Sylvie didn’t grow up in a setting that forced her into the fight world, nor was she told that her ambitious pursuit will result in a lucrative career and glory. As a female fighter in Thailand, she knew that it would be quite the opposite. While others are chasing an undefeated record, money, glory or are “living it like a Thai” for a couple weeks throughout the year in a resort, Sylvie is fighting for something that perhaps only she will gain the satisfaction of feeling.

Although she has gained a loyal & intimate following through her blog 8limbs.us and her Patreon project, we live in a world where we constantly seek approval of our friends, our families, our fans, and most toxic of all, the approval of the masses browsing through the internet, but it seems that whether it be one or one million people standing behind Sylvie, her calling would be just as strong, her vision would be just as clear, and her goals would be checked off in the same fashion as they have been thus far.

I have been checking in with Sylvie throughout the years by chatting with her on the podcast, reading through her work, and by watching her fight live. I recently had the opportunity to play with my new camera and put together this full fight video of Sylvie von Duuglas-Ittu giving up 7 Kg [15+ lbs] to take on Nang Hong Liangprasert:

Traditionally, the first two rounds in Thailand are used as a warm up; giving a preview of each fighter’s movement to those betting on the fight. It is not a rule that set in stone as the norm is broken on a regular basis, winning these rounds bears a smaller impact on the fight then rounds 3 & 4 do. Sylvie and her opponent have fought on a number of occasions in the past, with only one of the three matches resulting in a loss on Sylvie’s side – a stoppage due to a cut.

You can see the size difference as they trade kicks in the first two rounds, an aesthetic advantage for her opponent is clearly present. As rounds 3 and 4 come into play Sylvie begins to pierce the centerline with her knees, landing a series of dumps and controlling her opponent’s posture [effectively using her head as leverage]; all in the rounds that truly matter.

The dumps, the grinding clinch and the kick onslaught in the earlier rounds begins to wear on Nang Hong. Her aesthetic advantage now becomes a disadvantage as she begins to show fatigue – another factor taken into account in Thai scoring. You can hear Sylvie’s husband Kevin yell from the corner, “she is tired, make it show! Visibly show more energy.”

Sylvie executes the instruction by dumping her opponent a few more times; as Nang is broken apart from the clinch and stands up, you can see the fatigue in her body and face. As the closing seconds come, Sylvie dances off the victory – an important chapter within this bout. To seal the win Sylvie must show confidence in her victory, if she were to signal that she is winning, but insecurely chase another few points, it may show the judges that she isn’t confident in her performance; that it wasn’t enough.

It was enough. Sylvie defeated Nang Hong once again just a week later.