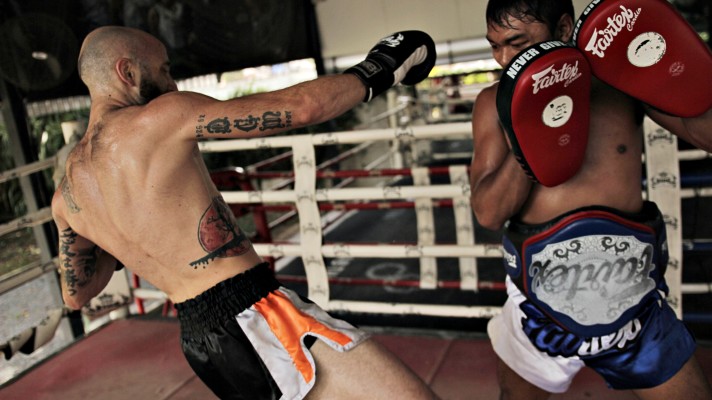 Training for a fight is a daunting task on its own. Stepping up to fight twice in one night against top level competition brings the definition of a “daunting task” to a whole new level. Sean Fagan of Muay-Thai-Guy.com is doing just that.

After taking two losses following an impressive career as an amateur and semi-pro, Sean has taken strides in every aspect of his life to make the dream a reality. To prove to the world that taking a big risk is the key to becoming something exceptional.

I sat down with Sean to get insight on what it takes to prepare for a high level tournament in Bangkok, Thailand.

What changes are you making to the structure of your training? Is it based on the tournament format?

I am making that I am building a strong aerobic base early on in the camp to help with recovery. This in turn helps me to stay in the gym, putting in extra hours. As I get closer to fight day, I increase the intensity, switching to sprint work in an attempt to peak before the tournament. Based on the tournament format, pad work and visualization sessions are done in a similar fashion as the tournament.

3 x 3 minute rounds on the pads, shadowboxing and visualizing. In between I catch my breath, shadowbox and stay loose. Taking a 10 minute break, keeping the heart rate up, but steady. This is in an attempt to stay warm, to not let the soreness set in from one fight to the next. All with fight night in mind.

Fighting twice in one night is a mental obstacle to say the least, how are you preparing your mind for these bouts?

First and foremost, I accepted my past and my recent losses. I use them to prepare myself moving forward, I believe everything has come together for this fight to happen. I have had a training camp with no unwanted distractions, I have an amazing support team around me, I even hired a mind coach by the name of Joshua Manuel (Podcast: Fight Hypnosis and the Unconscious Mind with Joshua Manuel).

Initially, we simulated a training session, feeling the exhaustion, but having to push through it. It has helped me to get more reps in without injuring my body, as well as tremendously improving my focus and output in training.

The night of the fight is the second scenario that we would walk through; building my confidence through detailed scenarios, powerful visualizations – literally feeling myself in that moment. I would picture the openings and taking advantage of them so once they actually present themselves in the ring, I will take instant advantage. Familiarity.

How do you feel about fighting on a nationally televised show in Thailand?

It’s another fight, but it is a top tier fight. I am happy to represent Khongsittha and the US on such a reputable show as Super Muay Thai; it gives me to opportunity to showcase my skill across the world (Super Muay Thai Live Stream 8:00 PM Bangkok Thailand, 9:00 AM US EST – Live on Facebook). However, at the end of the day, as I said, it’s just another fight.

Do you believe in playing it safe? Or taking the chance to get the early knockout. Coming into the second fight unscaved?

I am just as ready to grind three rounds as much as I am ready to finish the fight in the first. I am looking to finish early, but I won’t be forcing it. Grinding fight or knockout, either way I am ready.

What are some of the biggest challenges that a fighter may face, and how can they deal with these challenges when preparing for this type of tournament?

Injuries, but that is to be expected, not much you can do about that during the tournament. I believe the mental preparation  in advance, the training, and just accepting the fact of what is to happen that night. Two high level fights, we signed on the dotted line. You deal with it by accepting it, the rest is letting yourself do what you have trained your ass off for.

Any final thoughts or pieces of advice?

Believe in yourself and you never know what is possible. Tune in to see the result: Super Muay Thai Live Stream 8:00 PM Bangkok Thailand, 9:00 AM US EST

Sean has been severally addicted to Muay Thai since 2008 and has been training and competing in the sport for over 7 years. After his 1st trip to Thailand he began Muay Thai Guy and started blogging shortly after. Now Sean’s goal is to spread the word of this beautiful art as far as possible and help fellow Nak Muay improve themselves through Muay Thai.