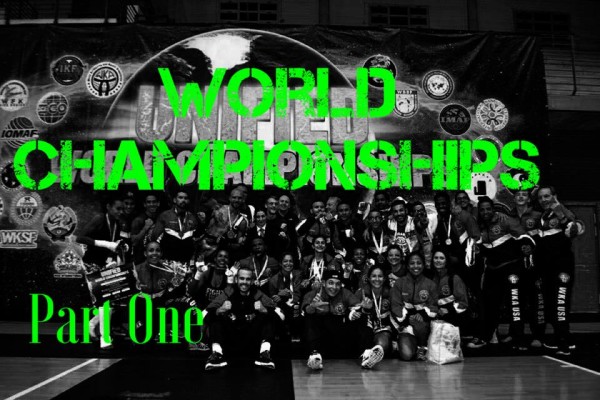 I’m not sure where to start this post. This post will be unlike any other, it is a mix of amazing memories, incredible people within the USA team and back home, an article about challenges and emotions, of pain and glory, of isolation and of deep thoughts throughout the entire process.

How did I get here?

We often forget this. Which is good, it means we are focused on the now, on reaching our goal of success. Now.. with everything said and done I must go back to figure out what led to this success, in an attempt to replicate it over and over again.

I have gone 9-0 this year against some of the best fighters in my weight class, as well as some not-so-talented fighters within the mix. Each fight teaching me a different lesson. I defeated last year’s USA World Champion, and the USA National Champion at the National tryouts in Virginia to earn my spot on the team.

It was never my intention to go to Spain. My intention was to go back to the tryouts and make a statement, to become a National Champion and show that hard work and consistency creates endless opportunity for success.

To fight in Spain was a commitment, it was a risk and a large investment. Team USA does not cover any costs of the trip and that meant a $3,000 investment, as well as time away from work and the pressure of making everyone around me proud. The fear of disappointing those around me. Visualizing what I would tell my friends and family if I failed. We all know how powerful thought-patterns and giving our energy to a negative thought process could be…

…I returned to the same thought pattern I had when I left to fight in Thailand. Just slide your credit card through and make it happen. If you commit to this, paying off a bill will be an easy obstacle to overcome in the grand scheme of things. It’s exactly what I did, followed by a plan to put myself out there and to look for sponsors & support. I am someone who despises having others do things for me.

I left my little bubble, my comfort zone. I began a GoFundMe campaign, I began to take extra hours at work, I put my story out there to media outlets, I organized a fundraising smoker event with the help of others, I let myself be vulnerable.

“when you take risks, doors begin to open up. When you let yourself be vulnerable, when you come out of your comfort zone, and take that first risk to be different, something in the world changes. Energy shifts and opportunities become limitless…”

It could have been easy to keep quiet, to be safe and fear the thoughts others had of me. What happened was surreal… People I never knew followed me, came together in support. Fox News featured my story during NFL commercials and on the 10 o’clock Sunday News. The newspaper released an article in the sports section with the headline “Local Fighter Goes Global”. Training partners came together to help me in camp, my co-workers created a donation box, almost all of my clients were very selfless and accommodating to my new training schedule. My sponsors increased their support on their own terms.

I had less hours in the day, but I trained and worked more then ever. I sacrificed love, I sacrificed comfort, I isolated myself in an attempt to have no possibility of failure.. still knowing there is a chance that it will not work out, that I can lose or get knocked out with one simple mistake, leaving defeated, empty handed. But, that was not important. What was important was that I made the decision to go, dream-chasing, regardless of the outcome.

Traveling to Spain was quite an adventure in itself. Everyone arrived at the airport in their personal team’s gear. People kept to themselves for the most part, many of us have competed against each other in the past in one way or another. We knew that there is a chance we could be fighting each other in the finals, and I’m sure that played a small part in each sub-group’s isolation.

Two different flights were formed by the WKA US Team, some fighters traveled separate from those. Fighters from Oregon, Puerto Rico, Virginia, Jersey came together.. the list goes on and on. There were less then 30 fighters on the team after the 400+ that came to the try outs.

The plane landed, we traveled to the hotel and were assigned room mates. I was just hoping mine wasn’t too awkward and could handle me in my boxer briefs for 95% of the time that I am in the room.

My room mate was a fighter named “Gumby” who trained under the WKA’s president. Thankfully he was great at handling homo-erotic jokes, my weight cutting journey, and pre-fight attitude. Great support and positive attitude to have by my side.

The team meeting began. We all checked our weight and fight divisions. Some of the weight classes were different from the National’s and those posted online. I had to jump up to the 178.2 weight division (173 lb division at National Championships).

The most important part of this meeting was the uniforms. Amazing how powerful something as simple as wearing the same color can be for morale. We became a unit, we became a team, we became a force to be reckoned with. Every sub-unit that originally had their personal team’s uniform became a part of one elite group of fighters, coaches, and officials. We forged Team USA.

The next day was similar to last year’s tryouts. Cutting a lot of weight, dehydrated brains and attitudes, laughs of exhaustion, six packs and vascular bodies. After a couple of hours we all weighed in and celebrated with some great local food, followed by shadowboxing on the beautiful beaches of Benidorm, Spain.

Team training begin the next morning after breakfast. The food was delicious on most days, a buffet style, home-cooked breakfast and dinner including a vast variety of foods from different cultures. Unlimited food equaled out to be a fighter’s heaven, most people taking back baked goods and fruit on the go.

The training wasn’t formatted, it was at our own pace. Some people like to take it easy and shadowbox, stretch, and rest up. Some fighters need to keep their intensity up in an efficient manner to peak before the fight. It was really interesting to see how each fighter and coach handled their training during the week.

The typical jump rope, shadowbox, pad work, and light sparring I would normally do was my routine in Spain, less typical was the scenery. The beautiful landscape of mountains amidst a covering of clouds, a pool to cool-down in, and a training area made of turf.

You can feel and see that we had a team full of fighters and coaches hungry for gold. Anytime you stepped outside, whether it was at 6:00 AM or at 10:00 PM, there was someone outside staying sharp shadowboxing. Meditating. Visualizing their moment of greatness. Everyone on the team was committed, everyone had the work ethic and mindset of a champion.

With the weigh-ins finished it was time to take a look at the brackets and be ready to fight. This was the first part in which people begin to seriously stress. After coming half way across the world it was disappointing to hear that you may be facing one of your team mates in a preliminary fight or in the finals. You would think the hotel would become the Ultimate Fighter house in which people are looking at each other as possible opposition, but it was refreshing to see quite the opposite energy.

Neither fighter wanted to fight against their team mate, but this entire event is based on building experience and representing the red white & blue, at the end of the day it is a victory for our nation. (Rami’s Speech on victory regardless of the decision, regardless of the outcome)

Some fighters were forced to go up in a weight class due to other nations not being able to provide a representative in the less-popular weight classes. In the female divisions we seemed to be rather dense, with a lot of match-ups against team mates, and our now 2x Heavyweight Champion Angela Whitley giving up to 50+ lbs as she originally weighed in for the 140 lb weight class.

This was the leg of the journey where everyone was figuring out themselves, adapting to their new environment, and forming bonds with team mates and the Team USA coaches. It was especially interesting to see how those came without coaches or friends were treated, which I will dive deeper into in Part Two.

Missed flights, lost luggage, weight class changes, fighters finding out they will be fighting their team mates all seemed like obstacles. It was inspiring to see how well each individual handled the stress of each event, everyone rushed to each team mate’s side to help them see the opportunity in these obstacles & how grateful we should be for having the opportunity to come half way across the world, at a chance to win or to be beaten for a world title. To be called a World Champion.

Paul Banasiak is a Muay Thai fighter/addict, 6x champion, trainer, and fitness professional. After leaving medical school without looking back, he decided to fully follow his passion of helping others become the best version of themselves, creating MuayThaiAthlete.com. A website for those who are already passionate individuals who want to take their life&training to the next level.

Obstacles or Excuses? How to make it to the gym EVERYDAY | TMTG #108