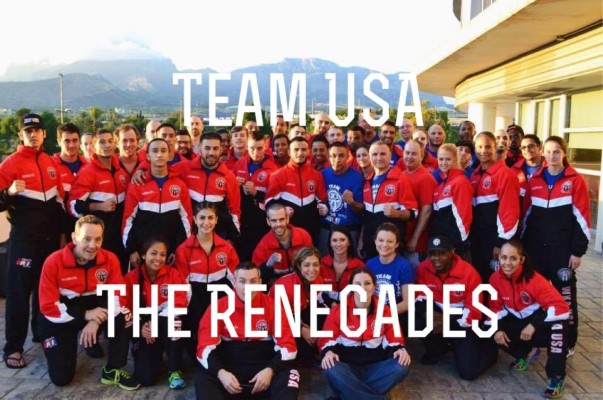 This entry will be jumping straight into the action of the World Championships and a snip-it of the craziness that happened thereafter. If you haven’t read Part One of this article, make sure to click the link and read all about the events that led up to the action.

A quote from Jason Farrell about the experience – Team USA Coach

This is a very special, and gifted group of Fighters, Coaches, and Staff. Many of these athletes brought home multiple medals. The US is still building it’s reputation for Muay Thai and Kickboxing on the world stage. We aren’t supposed to win at these events, but this group of Renegades set out with a purpose, and left everything in the ring. Lead by some of the top coaches in the country, they would go on to shake up the world and leave a memorable mark.

From the cafe and bar of the hotel, to the arena, the foreigners definitely had a stigma associated with the Americans. I was personally asked how far “I believe” I can go in this tournament. As with every fighter who believes in him or herself, my reply was  “gold”.

After facing the best the US had to offer, we flew across the world to represent our country,  why would we come for anything less?

To the foreigners the response was “egotistical”, I was told we carried ourselves like self-centered individuals. It’s humorous as I was born and raised in Europe; the stigma toward Americans was exactly the same as described above. With that in mind I propose a question – Which is worse? Spending energy thinking about your goal and purpose, or expending your energy on someone else’s habits?

Let’s just say this mental state played in our favor.

The action began. Fighters going to war in multiple rings.. Red, white and blue colors in the crowd chanting for their team mates. The US flag on the back of each representative after every performance.

We were ready to take on the world and every powerhouse team, but with any journey to greatness, challenges began to arise.

The Challenges and Team Spirit

Fighters began to get sick, some caught a stomach virus, some were injured from their early fights, and some knew they were soon to face a team mate.

The team’s support was unreal, those who were injured began to work with the fighters still in the game. Those who came alone were quickly given attention by coaches from various US gyms. The coaches were advocating for the fighters who had multiple fights in a row, helping to even out the brackets that gave fighters an uneven advantage.

Everyone was in this as a TEAM.

USA vs USA match ups began to happen as the finals closed in. There was no animosity as both fighters were bringing gold and silver back home. At the end of each bout, love and respect was shown by both fighters.

As the last day of the tournament came. The arena was much more silent. The finals were on their way. Fighters knowing that they were coming towards the last moments of their journey.

Many were using the journey as fuel. Reminding themselves that they defeated any opposition in the US to travel half way across the world, for a chance at taking home a world title. That moment was minutes away. Three rounds, against an opponent who has also blasted through the competition, that has gone through the same hell of a journey.

As said by Jason, we are still building our reputation on the world stage in this sport, but this team was full of passion, love, and would go on to become the top team in the Muay Thai division. The team known as the renegades:

The energy after the final fight between the US and Netherlands was indescribable. The top two powerhouse teams were the only ones left in the building, screaming for their team mate. US knocked out the Dutch champion in the third round. Team USA shut down the house – taking multiple golds in multiple divisions, going against all odds, destroying doubt.  The entire team was on a type of high.

The celebrations were nothing short of exciting. But first, we had to take a second to realize what had just happened, that this isn’t the end of the journey.

Speech given by the head coach of the US team after the World Championships – winning, losing, becoming a world champion:

The last fight I wrote about was between myself and the Dutch representative. Doubt became my main source of fuel. I made the decision to take on a second bracket in the Full-Rules Muay Thai division. This meant an extra two fights, the first being against the British Muay Thai Champion, and the second against the 70W- 7L Dutch champion. Many of the officials warned me of the Dutch fighter’s heavy hands, experience, and professional record being too much for me to handle – with that, any questions I had disappeared. My mission was to prove everyone wrong.

As stated above, fighters went through grueling training, time away from family and friends, taking a big financial hit for this opportunity.. and still not being able to compete because of injury or uncontrollable circumstances. I believe that I would be cheating each member, cheating every supporter, cheating my team if I didn’t agree to take the fight.

I want to thank my team mates and coaches, both at home and in Spain, my supporters, and everyone who is helping this sport continually grow. See you in Italy – 2016!

Paul Banasiak is a Muay Thai fighter/addict, 6x champion, trainer, and fitness professional. After leaving medical school without looking back, he decided to fully follow his passion of helping others become the best version of themselves, creating MuayThaiAthlete.com. A website for those who are already passionate individuals that want to take their life&training to the next level.

3 Things You Don’t Realize Your Trainer is Doing

Teep Technique to Keep Your Opponent at Bay